NEVERMORE is a tone poem that portrays Edgar Allan Poe’s famous work, The Raven.  The structure of the poem is mirrored in this work’s formal design.  The raven’s infamous response, “Nevermore,” serves as a refrain, responding to the questions of the main character.  This refrain is represented musically with a peculiar melodic idea that separates one episode from another.

The pitch material in this piece is generated from two sonorities: the augmented triad and the half-diminished seventh chord.  The refrain sections (rehearsal numbers 77, 209, and 283) are constructed out of a single augmented triad.  The symmetry of this chord allows each refrain to use the same pitches, while also allowing the harmonic motion to move into the new key of each subsequent episode.  Pairs of half-diminished chords, a whole-step apart, generate the pitches for each episodic tonal area: Eb minor, G minor, and B minor.

I chose to write Nevermore using this harmonic language as homage to Bernard Herrmann. This was not only out of fondness for his music, but because of the similarities between Poe and Herrmann’s frequent collaborator, Alfred Hitchcock. I would like to think that if Poe had been a film maker, Herrmann’s music would have been just as fitting his films as it was for Hitchcock’s. 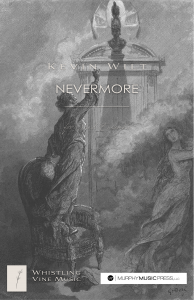 This work is also available for purchase through Murphy Music Press.